Afghan nawroz is celebrated widely. Also known as Farmer’s Day, the observances usually last two weeks, culminating on the first day of the Afghan New Year, March 21.During the Taliban rule (1996–2001), celebrating afghan nawroz was banned and considered an “ancient pagan holiday centered on fire worship”. Preparations for Nawroz in start several days beforehand, at least after Chaharshanbe Suri, the last Wednesday before the New Year. Among various traditions and customs, the most important ones are as following:

Nawroz in Mazar-i-Sharif, Afghanistan
Guli Surkh festival (Persian: ميله‌ى گل سرخ‎‎): The Guli Surkh festival which literally means Red Flower Festival (referring to the red Tulip flowers) is the principal festival for afghan nawroz. It is celebrated in Mazar-i- Sharif during the first 40 days of the year when the Tulip flowers grow in the green plains and on the hills surrounding the city. People from all over the country travel to Mazar-i-Sharif to attend the afghan nawroz festivals. Various activities and customs are performed during the Guli Surkh festival, including the Jahenda Bala event and the Buzkashi games.

Jahenda Bālā (Persian: جهنده بالا‎‎; old Persian Zoroastrian term Zend or Zand Persian: ژند ‎‎):Jahenda Bala is celebrated on the first day of the New Year (i.e. afghan nawroz), and is attended by high-ranking government officials such as the Vice-President, Ministers, and Provincial Governors. It is a specific religious ceremony performed in the Blue Mosque of Mazar that is believed (mostly by Sunnite Afghans) to be the site of the tomb of Ali ibn Abi Talib, the fourth caliph of Islam. The ceremony is performed by raising a special banner whose color configuration resembles Derafsh Kaviani. This is the biggest recorded afghan nawroz gathering where up to 200,000 people from all over Afghanistan get together in Mazar’s central park around the Blue Mosque to celebrate the banner raising (Jahenda Bālā) ceremony.

Buzkashi: Along with other customs and celebrations, normally a Buzkashi tournament is held during the Guli Surkh festival in Mazar-i-Sharif, Kabul and other northern cities of Afghanistan.

Haft Mēwa (Persian: هفت میوه‎‎): In Afghanistan, people prepare Haft Mēwa (literally translates as Seven Fruits) instead of Haft Sin which is common in Iran. Haft Mewa is like a fruit salad made from seven different dried fruits, served in their own syrup. The seven dried fruits are: raisins, Senjed (the dried fruit of the oleaster tree), pistachios, hazelnuts, prunes (dried apricots), walnuts and either almonds or another species of plum fruit. 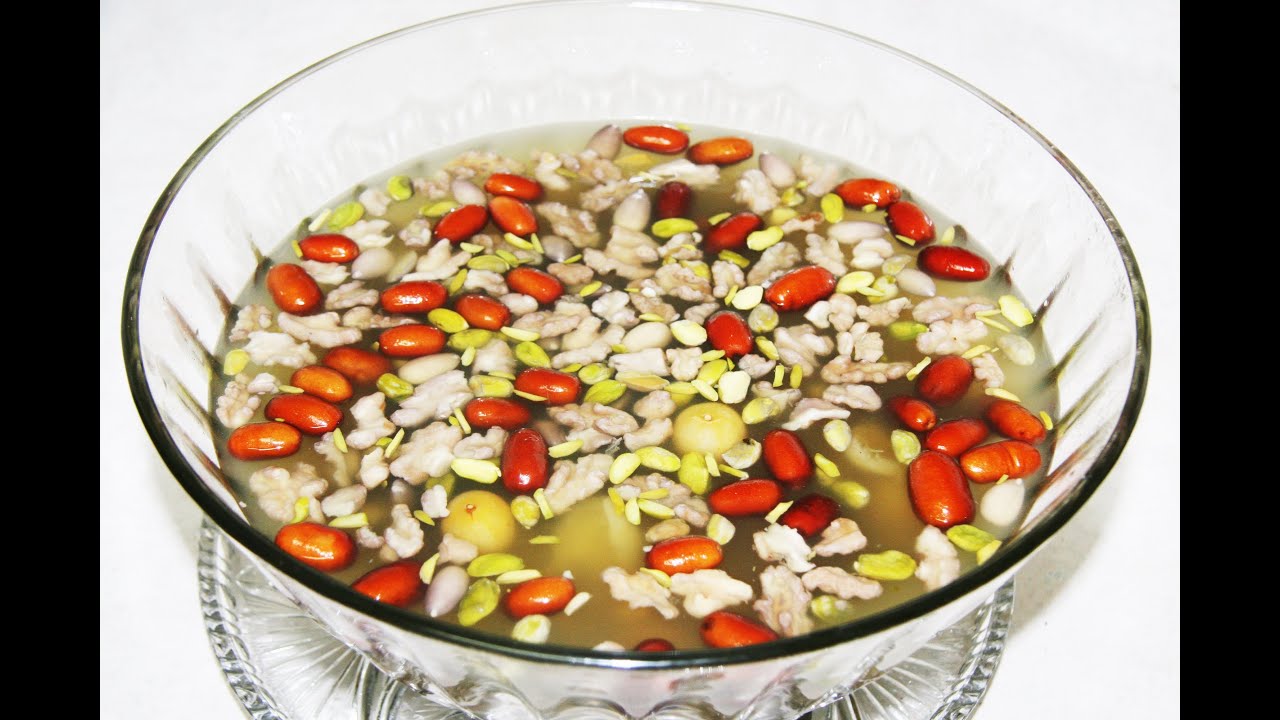 Samanak: It is a special type of sweet dish made from germinated wheat, and is normally cooked or prepared on the eve of afghan nawroz or a few days before. Women have a special party for it during the night, and cook it from late in the evening till daylight, singing a special song: Samanak dar Josh o mā Kafcha zanem – Dochtaran* dar Khwāb o mā Dafcha zanem (* Dochter means daughter, young lady or girl).

Special cuisine: People cook special types of dishes for afghan nawroz, especially on the eve of Nawroz. Normally they cook Sabzi Chalaw, a dish made from rice and spinach. Moreover, the bakeries prepare a special type of cookie, called Kulcha-e nawrozī, which is only baked for Nawroz. Another dish which is prepared mostly for the afghan Nawroz days is Māhī wa Jelabī (Fried Fish and Jelabi) and it is the most common meal in picnics. In Afghanistan, it is a common custom among the affianced families that the fiancé’s family give presents to or prepare special dishes for the fiancée’s family on special occasions such as the two Eids (Eid ul-Fitr and Eid al-Adha), Barā’at and Nawroz. Hence, the special dish for Nawroz is Māhī wa Jelabī.

Sightseeing to Cercis fields: The citizens of Kabul go to Istalif, Charikar or other green places where the Cercis flowers grow. They go for a picnic with their family during the first two weeks of the new year (i.e afghan nawroz )
Jashn-e Dehqān: Jashn-e Dehqan means The Festival of Farmers. It is celebrated on the first day of year, on which the farmers walk in the cities as a sign of encouragement for the agricultural production. In recent years, this activity is being performed only in Kabul and other major cities, in which the mayor and other high governmental personalities participate in watching and observing.

Kampirak: Like “Haji Nawroz” in Iran, he is an old bearded man wearing colorful clothes with a long hat and rosary who symbolizes beneficence and the power of nature yielding the forces of winter. He and his retinue pass village by village distributing gathered charities among people and do shows like reciting poems. The tradition is observed in central provinces specially Bamyan and Daykundi.